Hello! Thanks for stopping by and welcome to my website, home to my books in The Secrets of Grindlewood series and the new Harp Maiden trilogy. You'll meet Jamie, Jemima, Timber, Teddy and all the gang in Grindlewood. Find out about Grindlewood past and present, its magic and mysteries, secrets and spells. You'll also discover the adventures of Evie Wells, the Harp Maiden, as she discovers her magical gift and a world of mystery in Dower Hall.

I hope you enjoy your visit.

About the author - Jackie Burke

Jackie is the author of The Secrets of Grindlewood , a much-loved fantasy series for children and the new trilogy Harp Maiden.

Jackie grew up with her sister and three brothers in Dublin, Ireland. She had dreamed of becoming a writer since she was a little girl but other things (like work, sport and baking) kept getting in the way. Once she started writing The Secrets of Grindlewood she was entranced by the world appearing at her fingertips. What started as one book quickly turned into a series of five.

The Secrets of Grindlewood is inspired by all that Jackie loves in nature; gardens, forests, wildlife and especially cats and dogs.

Her new trilogy, Harp Maiden, draws on her love of music to tell the story of young Evie Wells who discovers she can play a magical harp. Her unique gift leads to adventure and danger in equal measure as she discovers her destiny as the Harp Maiden.

ARRANGE A VIRTUAL VISIT TO YOUR SCHOOL OR LIBRARY

Have Jackie virtually deliver her highly popular workshops on creative writing, storytelling and the magical worlds of Grindlewood and Harp Maiden!

A FANTASY TRILOGY FOR CHILDREN AGED 10+

The Final Part Of The Magical Trilogy

The ogress is dead, but Evie’s troubles are far from over. Now she must stop the demon lord Volok from resurrecting his wife, the dreaded Queen Madruga.

But tragedy strikes at home, and disasters rock the entire town as Evie struggles to finish the six steps of the Ladder of Charms. She must persevere – no matter what the cost – and tap into the powerful magic that will allow her to destroy the demons forever.

As burning questions haunt her, Evie worries that the new magic will turn her into someone or something she doesn’t want to be. Will her friends abandon her if she reveals her darkest secrets? And what and where are the five talismans that Volok wants so badly?

Struggling to find all the answers she seeks, Evie feels torn apart by her secrets. Her quest is drawing to a dangerous close, but not before her father shares a startling secret of his own. In the end, Evie must choose her own path, whatever others may think, but it’s a choice she finds increasingly difficult to make.

After her dramatic escape from a burning Dower Hall, Evie is determined to find the magical Black Ruby and solve its mystery. But she struggles to come to terms with being the new Harp Maiden, and keeping her secret from the people she loves becomes more difficult every day.

When she goes in search of answers, Evie makes some shocking discoveries. An ancient sorceress is under a cruel curse, a demon queen yearns to return from the dead and reek destruction, and the ghosts of Dower Hall still linger in the woods. If Evie can find the Black Ruby and harness its power, perhaps she can rid the world of dangerous demons once and for all.

Evie risks being overwhelmed by the web of secrets she has woven around herself. Unsure who to trust, she is torn from the predictable life she once knew and tossed into a strange and troubling world of magic.

"Like its’ predecessor, Harp Maiden, what we have here is an incredibly constructed, beautifully written Gothic mystery that takes us to places we can only visit in our dreams…or nightmares. Consuming, eerie, fast-paced and simply extraordinary."

It's 1899, and fourteen-year old Evelyn Wells has just won  the opportunity of a lifetime: a scholarship to study music at an isolated and mysterious conservatoire. Evie leaves her family and moves to Dower Hall to begin her lessons with renowned maestro, Lionel Thorn.

But all is not as it seems at the rambling old manor. Evie soon realises that Dower Hall harbours many dark secrets and some strange and threatening characters. There are secret doors at every turn, and a peculiar little harp seems to contain a dangerous kind of magic.

Evie must discover why the maestro is so obsessed with the strange harp. Why is she the only one who can play it? And if she is the next Harp Maiden, what does the future hold, and is it a future that she truly desires?

"Want a story that sends shivers down your spine and makes you cheer out loud for the hero? This is it. Harp Maiden is simply marvellous."

Read the full review at Litvox.com

A FANTASY SERIES FOR CHILDREN AGED 8+

'A spell, a quest and the bravest dog in the world.' 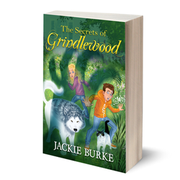 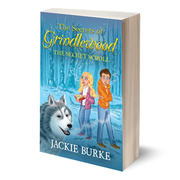 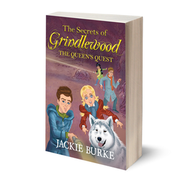 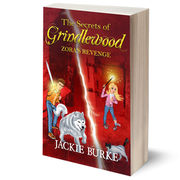 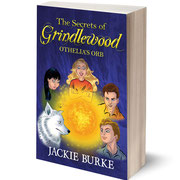 The Secrets of Grindlewood tells the story of Jamie and Jemima Grindle, Timber and Teddy as they battle Worfeus the Warlock.

"The Verdict. A classic tale to delight readers aged eight to 12."

Explore The secrets of Grindlewood

Explore each of the books in the series and find out what readers are saying.

Who are the Wandelei, how did the
Forest Queen get her name and why is the Ancient Book of Magic so powerful?

Find out more about Jamie, Jemima, Teddy and Timber as well as all the other characters.